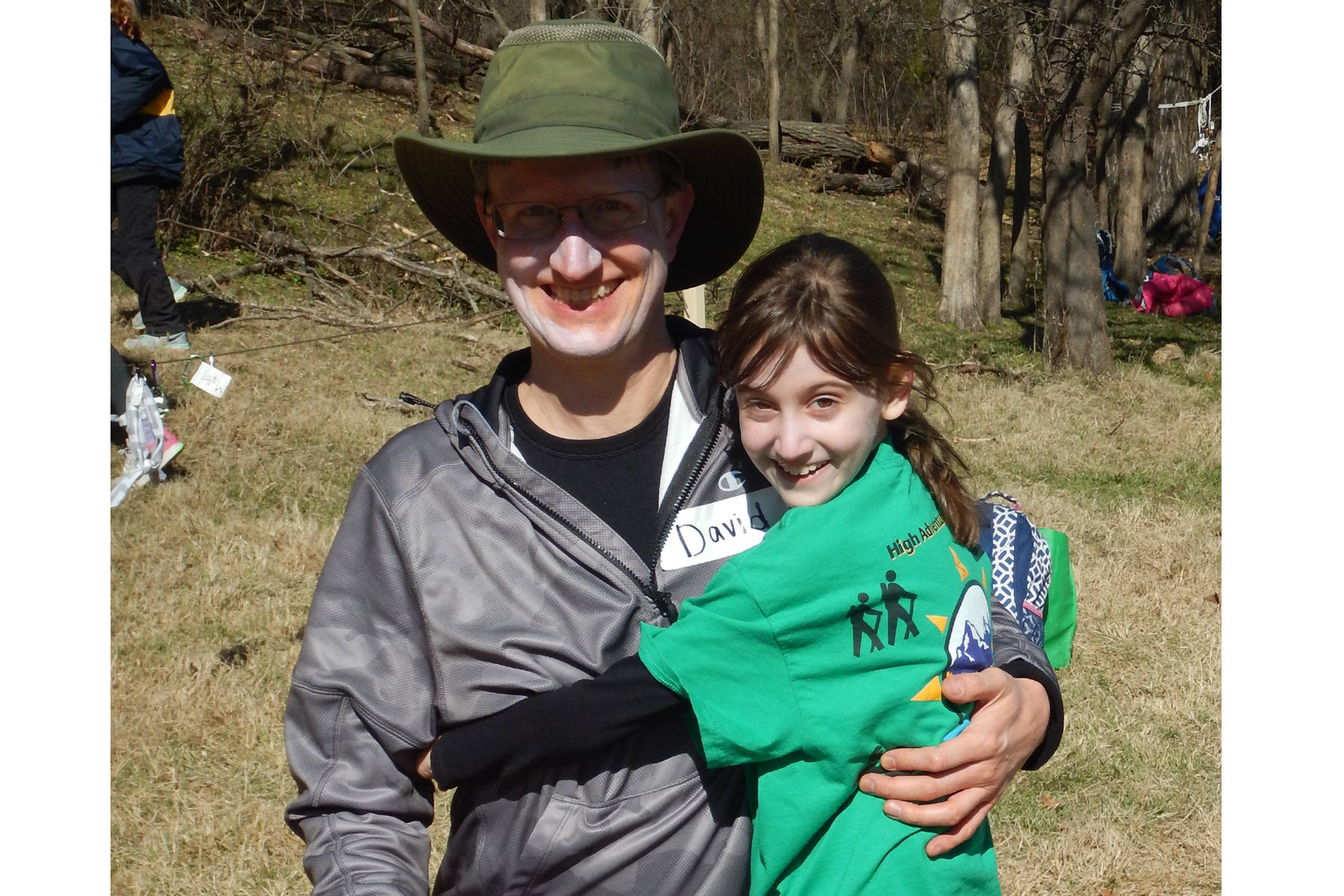 The last temperature to register on my Dad’s phone was 18 degrees.  Since then we had cautiously moved up the winding frozen path to the starting point for our adventure.  My teeth were chattering very loudly, and I hadn’t felt my toes for at least an hour.  The toe warmers stuffed in my shoes had become ice cubes.  Yet, I was beyond excited as my Dad and I approached Mount Everest.  Our adventure together was within reach.  With determination and a fighting spirit, we sized up our first challenge of the day as sherpas beckoned us to begin.

Our journey started at a bus stop.  We all boarded the bus as the bus driver and assistant bus driver took their seats at the front.  As our excitement grew about our journey, we started belting out “The Wheels on the Bus”.  Our singing was soon interrupted by the assistant bus driver inquiring, “Hey, is that, a cliff?”  “Be quiet, I’m trying to focus,” scolded our bus driver as the edge of the cliff drew closer and closer.  Suddenly, the bus driver slammed on the brakes as we hit an icy curve.  Our bus slid halfway off of the cliff!  The assistant bus driver explained that we had to balance the bus to evacuate while the bus driver was busy screaming his head off up front.  All of the dads and daughters on the bus quickly started working together to devise a plan.  Dad and I gave each other a good luck hug before going to our places, daughters on one side, dads on the other.  We had attempted five times with no success, but on the sixth attempt, the bus balanced and we all threw ourselves out of the bus to safety.  Once we all hit the ground, we started celebrating together, except the bus driver, who was now off the bus but still screaming his head off.  We had trusted each other and worked together so we could solve the problem of getting out.  Further exercising our communication skills, we all agreed to walk the rest of the way to Dingboche.

With successful bus balancing skills under our belt, we sized up our next imposing obstacle – The Lhotse Wall.  Our sherpas explained we had to get across the wall.  Easy, right?  Not so!  We had to get across that terrifying wall in a snowstorm!!!  Due to the intense cold, the girls were blindfolded so our eyes wouldn’t get frostbitten.  I was finding it harder to breathe. I think it may have been due to the increasingly thin air.  The Dads would have to guide us.  Our small line went by fast, and the next thing I knew, Dad was tying on the blindfold.  I was excited and scared as I climbed onto the wall.  Slowly, I inched my way across while Dad yelled out instructions.  Even with Dad’s help, once I put my foot on a wobbly rock, and it rotated.  For one heart-stopping moment, my foot hung out in space before I found the next rock.  Slowly and carefully I moved across the wall with Dad’s help.  Once I reached the end of the wall, we both did a happy dance.  By using good communication and team work we did it!  Two obstacles down, and I’m still climbing.  Adventures with my Dad are always exciting and special!

We had reached obstacle three.  The sherpas welcomed us to the head of the Rongbuk Glacier and told us there was only one safe way across the Khumbu Ice Fall Zone.  They also reminded us that we couldn’t make any noise in the ice fall zone, there was a huge unstable ice formation, and if we made any noises it would come crashing down on us.  We had to swing by the ice formation and over a behemoth chasm.  We started planning how to tackle this obstacle outside the zone, but our strategizing was quick because of the ongoing blizzard.  When we were ready, the dads swung across first so they could catch their daughters when they went across.  I was the third girl in line and I hung on very tightly as I swung over the chasm, which now looked like a gaping mouth, ready to swallow me whole.  Suddenly, I realized the rope was going back across the cavern!  I’d missed the platform!  Luckily, a sherpa overseeing us swinging over caught the rope with me on it.  When I tried again, I pushed off even harder over the chasm.  I was flying!  As the rope neared the platform, Dad reached out with his long, strong arms and caught it.  I’d made it across with Dad’s help.

Our journey had already been long, and the obstacles just seemed to continue to appear.  Around the corner, I stared at a rope in the shape of a V with melted ice all over it.  The sherpa explained that the rope across the crevasse was small at first, but because of the crevasse’s movements, the anchor points were wider on the other side.  The air density was now less than half of sea level.   We had to get across it without falling into the ice crevasse.   A bird tried to strike up a twittering tune, but quickly fluttered off away from the Valley of Silence where no winds could penetrate.  The ground around me was riddled with ice crevasses.  I was feeling worried and a bit overwhelmed.  Could we do this?!  Dads and daughters were teams to get across.  We had to push against each other’s hands and go across sideways leaning into each other.  Suddenly, the ice crevasse slammed shut.  My stomach got left behind as we wobbled then kept going.  The end anchor points grew closer and closer until we’d made it!  Working together, my Dad and I had made it across.  Even some birds let out celebratory cheeps!

We continued to march on down the path; we came to a red sign with a skull and crossbones on it.  It read: Welcome to the Western Cwm Avalanche Death Zone!  Under that it said: ANY wrong move will trigger one!  Under that it said: Move it!  You have 48 hours before you freeze!  The sherpas told us we were in the death zone and were now officially enduring blizzard conditions.  To make matters worse, the Dads had left their snow googles at the last camp and were being blinded by the blizzard.  We had to guide the Dads across the Western Cwm by telling them where to step very carefully, a misstep might trigger an avalanche.  We all began across the area when suddenly we heard a faint cracking noise.  Someone had stepped wrong!  Thankfully, it wasn’t enough to trigger a wave of freezing cold snow down the mountain.  When we got to the other side, we could see the summit of Mt. Everest.  All of us celebrated silently.  Our goal was finally within reach.

My Dad and I looked at the last obstacle of our journey with anticipation.  Our sherpa explained that we still had to cross three knife ridges.  As I watched the other father/daughter teams begin their journeys across the ridges, it became clear this challenge was harder than it looked like it would be.  I suddenly had second thoughts about many of the must have items I had stuffed in my backpack that were now weighing me down.  It was my turn; I cautiously edged along the ridge sideways and I wobbled when met with the force of a huge gust of wind.  I tightened up my core to help keep my balance and continued on the ridge.  My breath slowed as I moved closer and closer to my first stopping point.  When I finally reached the rest point marker, I hugged it with joy.  Success – I was one-third of the way across.  My Dad helped me across the second ridge with his big strong arms.  I was truly thankful for his help.  With just one more ridge to go, my excitement felt explosive in my body.  I swallowed hard and set out on the third ridge with more confidence.  The end of the ridge became larger and larger and larger as I went across and grew closer to being done.  I reached out and hugged that anchor so tightly, I thought I might crack it.  I felt proud.  With Dad’s help, I had successfully navigated the final obstacle. 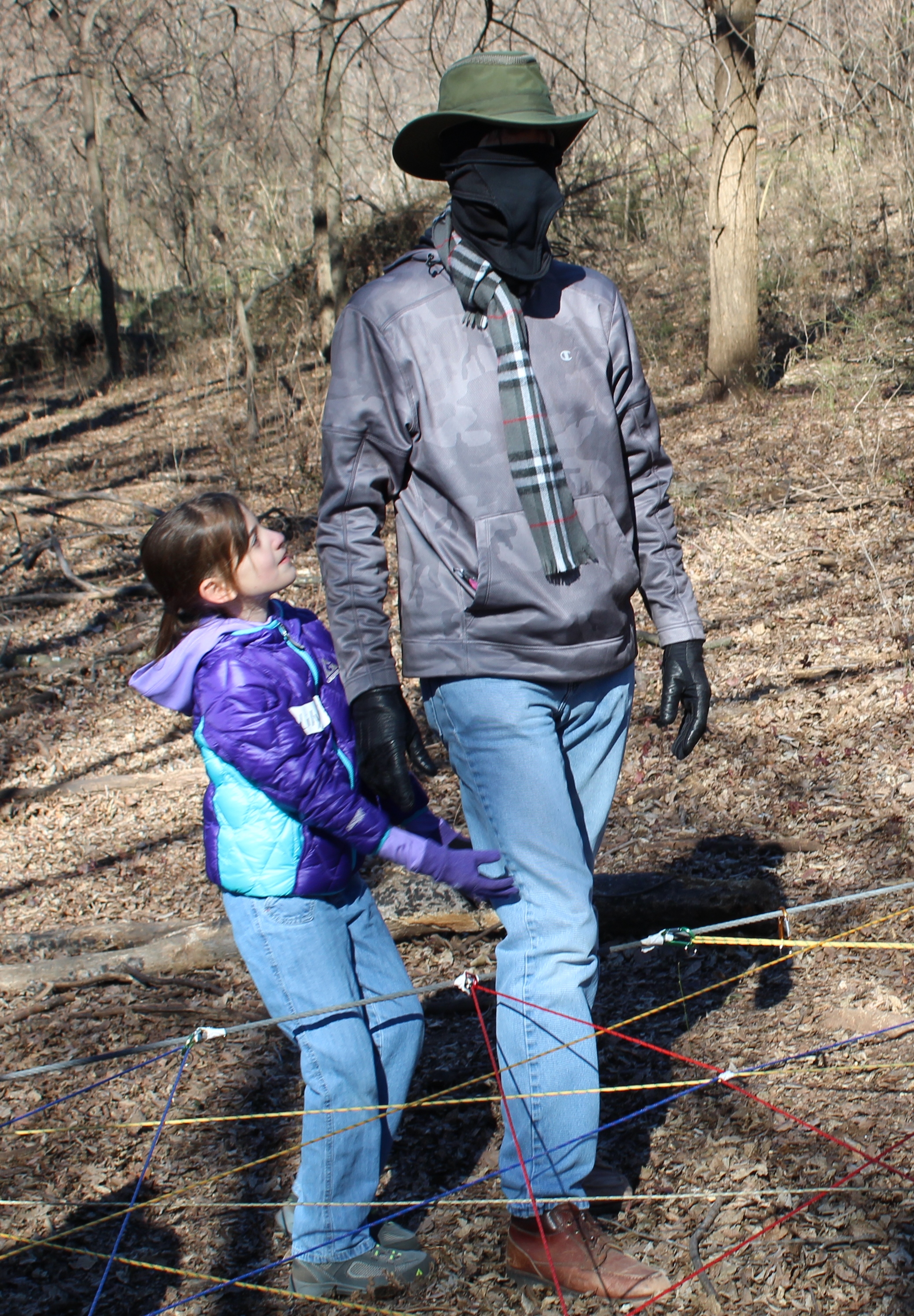 We scouted for the Abominable Snowman before setting up our chairs to enjoy the view.  My Dad and I had made it to the top of Mount Everest.  Our Mount Everest wasn’t in Nepal.  Instead it was a challenge course in Oklahoma which demanded trust, grit, and courage.  As I sat there with Dad, I knew that anything is within reach if I try my best and Dad is there cheering me on.